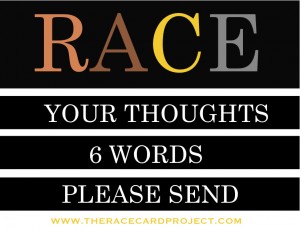 Hello and thank you for visiting The Race Card Project

My idea was to use these little black postcards to get the conversation started. But I quickly realized once I hit the road on my book tour that I didn’t really need that kind of incentive. All over the country people who came to hear about my story wound up sharing their own.

So the postcards that were supposed to serve as a conversation starter wound up instead serving as an epilogue.

I asked people to think about their experiences, questions, hopes, dreams, laments or observations about race and identity. Then, I asked that they take those thoughts and distill them to just one sentence that had only six words. People took the cards with them and mulled over the assignment. I hoped that a few might send them back to me via email or through the U.S. Postal Service. I tried to be realistic, set low expectations and then held my breath. Well, much to my surprise an awful lot of people took the bait.

The submissions are thoughtful, funny, heartbreaking, brave, teeming with anger and shimmering with hope. Some will with make you smile. Others might make you squirm. And there are a few that might make you wonder why they deserve a place on the website’s Race Card Wall.

Here’s the answer. If the intention is to use these cards to get a peek at America’s honest views about Race, then I must try to honor those people who offer up candor, even if what they share is unsavory or unacceptable in some people’s eyes.

I am grateful for the tremendous response. Thanks to all who take the time to scroll through the submissions…. and special Thanks to everyone who sends in six-word essays. Brick by Brick this wall has become a fascinating archive of attitudes about race at an interesting point in History. Despite all that is on display here…There is still, much to say.

Give it a try!