Grace Notes Blog- Talking about Race is like Cooking with Onions 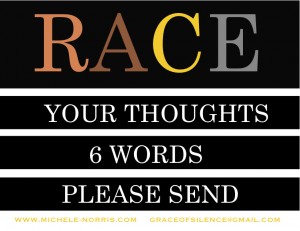 Even though I called my book The Grace of Silence, I always hoped that it would be the starting point for conversations. I just wasn’t sure HOW that would happen, especially as I hopscotched across the country on a 35 city book tour. So, I came up with an idea that might serve as an icebreaker. Everywhere I went I passed out little black post cards with the following message:

The cards were eye catching. They had a sleek black design and the word race was spelled out in a rainbow of hues. Sepia. Peach. Maize. Bronze. The postcards were my way of inviting people to engage in a little exercise. I ask people to consider the word RACE and to think of how they would express their thoughts, triumphs, laments, theories, anthems , hopes or dreams about RACE in just once sentence. And to make things interesting, there’s one more request. That sentence can only contain six words, much like Ernest Hemingway’s famous challenge to write a killer story using half a dozen words. Genius that he was, his offering was,
Baby Shoes. For sale. Never Worn.

My idea was to use the postcards to get the conversation started but I quickly realized once I hit the road on book tour that I didn’t really need that kind of incentive. All over the country people who came to hear about my story wound up telling me theirs. 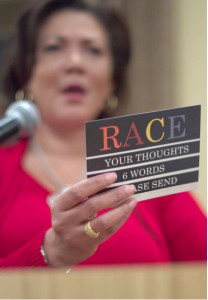 So the postcards that were supposed to serve as a conversation starter wound up instead serving as an epilogue. People took the cards with them and mulled over the assignment. I hoped that a few might send them back to me via email or through the U.S. Postal Service. I tried to be realistic, set low expectations and then held my breath. Well, much to my surprise an awful lot of people took the bait. Dozens of those little postcards started arriving in the mail every week and bit by bit more and more of those little six-word “essays” piled up in my inbox from all over the country, and them amazingly from all over the world. Just this week, I heard from people in Austrialia, London, Chile and Abu Dhabi.

They are thoughtful, funny, heartbreaking, brave, teeming with anger and shimmering with hope. Some will with make you smile. Others might make you squirm. And there are a few that might make you wonder why they deserve a place on my website’s Race Card Wall. Here’s the answer. If the intention is to use these cards to get a peek at America’s honest views about Race, then I must try to honor those people who offer up candid views, even when those views are unsavory or unacceptable in some people’s eyes. 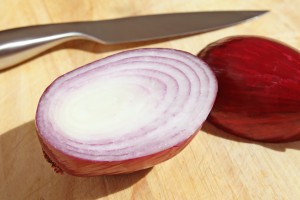 Here’s the thing. Talking about race is like cooking with onions. Sometimes it makes you cry. Sometimes it deepens the flavor. Sometimes it just gives you a wicked case of indigestion. Sometimes, all of the above and more.

Actually, most of the cards submitted thus far express a sun-will-soon-be-shining optimism that borders on the surreal. It has made some wonder, if people are expressing their honest assessment about the here and now or their genuine hope for where they want to be. I don’t judge. I just read and listen and learn as the six-word essays come in.

I hope you take a look at The Race Card WALL on my website. And yes, I chose THAT name on purpose. It’s my way to push back against something that has always made me cringe — the over-used accusation that people “play the race card from the bottom of the deck” if they deign to even approach the subject.

Check out the cards. Send in your own six-word “essay.” share the idea with others.

Let me know if you want a dozen race cards to use in your book group or in your classroom. And if your group happens to be discussing my book, The Grace of Silence, you can print out a pdf of the full “The Race Card WALL”.

Email us to request a Race Card for your class or book club. email: graceofsilence@gmail.com