Bricolage reviving controversial ‘Dutchman’ with the use of The Race Card 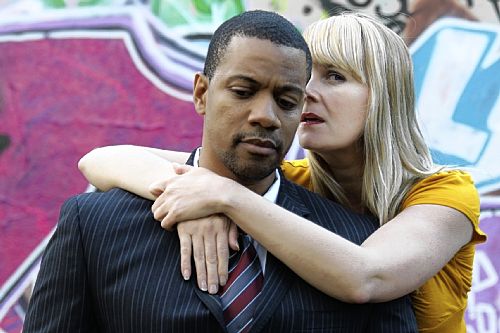 Credit: Jason Cohn "Experienced Bricolage audience members know that their interaction is often required and in this case, they will be asked to participate by filling out "The Race Card," six words describing their feelings about race, for a project spearheaded by Michele Norris of National Public Radio."

Jonathan Berry and Tami Dixon star in the Bricolage/August Wilson Center production of “Dutchman.”  “Dutchman” is either a powerful expression of America’s endless cycle of racial bigotry or a cliche from another era, while the character of Lula represents the worst of humankind or panders to biases.

In other words, the controversial 1960s play by LeRoi Jones, who was about to become Amiri Baraka when he wrote “Dutchman,” is a conversation waiting to happen, and that’s what collaborators Tami Dixon and Mark Clayton Southers are counting on.

Ms. Dixon performed as Lula in a reading of the play in 2007, the same year it was revived at the Cherry Lane Theatre in New York, and knew she wanted to come back to it.

“I’ve always had an interest in the play purely from an actor’s standpoint; [Lula is an incredible role] for a white woman. It’s tough, it’s powerful, it’s sexual, it’s evil; it’s all of these really meaty things that woman don’t often get to play all at once. … And then the subject matter of this play speaks to me because I see a very clear divide in the black and white communities here in Pittsburgh and just in general how American deals with racism or the lack of dealing with racism. This play screams it to me. It says, this is how ugly it really is; let’s not ignore it any longer.”

Ms. Dixon thought the timing was right in this, an election year, plus Playwrights has moved into the Bricolage company’s Liberty Avenue building and the center is an across-the-street neighbor. Mr. Southers had directed Ms. Dixon in that 2007 reading.
Talk-backs go ‘Between the Lines’

The shooting death of unarmed black teenager Trayvon Martin on the heels of the Jordan Miles case in Pittsburgh and the open wounds of Jonny Gammage’s death at the hands of local police officers, recounted recently in “The Gammage Project,” directed by Mr. Southers, have convinced Ms. Dixon that the “Dutchman” remains a relevant work for the 21st century.

The hourlong play is usually strung together with a second or even third work, but it was decided not to dilute the raw experience of “Dutchman” with another fictional piece. Each performance will be followed by a discussion led by someone who takes an active role in the community.

When Ms. Dixon began the journey to the talk-backs, she found that she had “no vocabulary to talk about race,” which surprised the vivacious actress, because she had grown up in a mostly African-American neighborhood.

She read “scholarly books” about the racial divide by authors such as Tim Wise and Cornell West “just to wrap my mind around what they are thinking and then take it from my own perspective and my own history and articulate it from there.”

The person most helpful in finding her voice on the subject was Justin Laing, arts program officer of the Heinz Endowments. As someone who supports Bricolage’s work and who is active in the community, she wanted his involvement.

“I had a meeting with him and [Heinz Endowments chief] Bobby Vagt, and I’m just uuuuhhhh. And Justin was challenging me. He said this play is cliche and it’s tired; why do people have to learn about racism on the backs of black men? And I couldn’t answer him. I don’t know why that would make it palatable. And we had many, many discussions, Justin and I, after that, because I really wanted him on board even if he hated the play. I wanted that voice because I think it’s an important voice to say that, that it’s tired. But I said it’s 48 years after this play was written … so how far have we come? So we just talked and talked and battled back and forth, and he really helped me to articulate my point of view.”

Mr. Southers found it too painful to participate in talk-backs during the run of “The Gammage Project.” A devotee of the late playwright August Wilson, he has since directed “Gem of the Ocean” for the Dayton theater company Human Race, with Jonathan Berry reprising the role of Citizen Barlow from a Playwrights production.

“Jonathan has been commuting back and forth rehearsing, and now he’s here,” Mr. Southers said. “So, now it’s game on.”

Ms. Dixon said she had admired Mr. Berry’s work but hadn’t known him before they began the emotional workout of preparing “Dutchman.” The play takes place in one seedy train car, re-created with authenticity by set designer Jesse Conner, with the audience bearing witness from raised seats along both sides (like medieval times, Bricolage founder and artistic director Jeffrey Carpenter, described it).

Lula attacks Clay on many levels, with apt comparisons to both devil’s serpent and temptress Eve.

How audience members view Lula depends on the individual. “One thing is the metaphor, what they relate the character to, whether your character is the system or this mythical person — what does the character represent?” Mr. Southers said.

Asked about gaining a certain level of trust with her co-star, Ms. Dixon said, “Having to be this intimate with somebody, ‘trust’ is a big word because I’m doing things to somebody I don’t think a person should do. And he is so generous with himself and allows me to go a little crazy, and we’ve build this wonderful connection. I don’t want to see him hurt and there are times in rehearsal I look at him and my heart just breaks. And I have to go wait, I have a job to do. The trust we have built is so important and paramount to this play.”

She praised Mr. Berry’s willingness to work on two plays at once, preparing “Dutchman” while finishing the run of “Gem” in Ohio.

Mr. Southers said the young man was feeling his success and couldn’t wait to keep up the momentum from role to role.

The director is on a roll of his own with barely time to breathe from “The Gammage Project” to “Gem” to “Dutchman.”

“I’m becoming a stronger director by being challenged, just working with [actor] Larry John Myers on ‘The Gammage Project,’ I learned a lot working with him. It was really a great experience, how he approached the craft. And now I’m seeing that with Tami.”

For a guy used to being in charge, one of the challenges has been to “wear one hat,” as director. The play takes place at Bricolage, where Ms. Dixon is producing artistic director.

“It’s not like Playwrights, where I wear multiple hats. But Tami wears multiple hats in this production, so she has to fight off those vibes as well just to keep the actress hat on. But she has a great way to deal with it, so we’re learning from each other.”

With a week to go, and the lobby of Bricolage transforming into a train platform and the train car ready to chug out of the station, all of the pieces for “Dutchman” are falling into place. Experienced Bricolage audience members know that their interaction is often required and in this case, they will be asked to participate by filling out “The Race Card,” six words describing their feelings about race, for a project spearheaded by Michele Norris of National Public Radio.

Time for the conversation to begin.

“Once the train takes off …” Mr. Southers said.