Don Cornelius. Say it ain’t so! 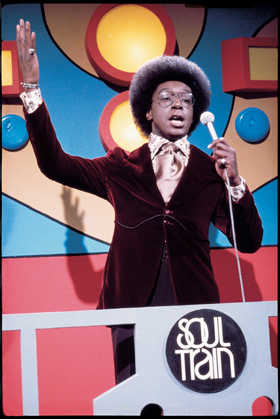 On the first day of Black History month I glanced at my cell phone and saw an email that tugged my heart and snatched me back in time. The ladies of my dinner group were circulating the news that was just hitting the wires:

He was found in his home this morning. Devastating news.

Devastating indeed His death hit me like a brick thrown through the window. Not dead? Not like this! I immediately snatched back to Saturdays in the seventies when my feet were groovin and my face was glued to my family’s black and white TV. I was surprised by the flood of memories and yet also comforted when I turned to twitter and found a similar outpouring of grief and reminiscence. There were so many people turning to twitter that #SoulTrain, #Don Cornelius and #PeaceLoveSoul immediately started trending and for a moment twitter was having the kind of technical difficulties you see on days of the World Cup Finals or the Golden Globes. 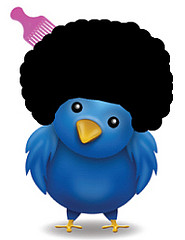 It was a sad way to commence Black History month but as one person pointed out on Twitter it was also fitting that the man who had so many of us dancing at the same time in our living rooms, had so many of us engaged in an online conversation. It was as if we were all doing one long Soul Train dance down memory lane to talk about his life and his contribution to our culture. All kinds of people from all over the place joined in the #SoulTrain Twitter timeline throughout the day.  So, I’m posting my Tweets and responses from February 1st. Consider it my roll down the middle of that social media Soul Train line…one hand in the air….one hand on the keyboard…..tapping out 140 characters at a time.

Don Cornelius. Say it ain’t so!

Soul Train showed us what to listen to, what to wear, how to dance, how to VIBE, how to be unapologetically fabulous. RIP Don Cornelius

pbsgwen (gwen ifill) I never could get my Afro to work right, but I am among the legion who wanted a turn on that Soul Train lineOffice. #DonCornelius RIP

KevinMcGil (Kevin McGill)  @michele_norris Listening to MFSB (The Sound of Philadelphia) Most definitive Soul Train Theme 4 me. Feel like part of my childhood is gone.

Okay, clock says I should be dashing out for lunch but instead I feel the need to dash out a few thoughts about Don Cornelius & Soul Train.

Amazed at flood of memories upon learning of the death of Don Cornelius. For a generation, that show is part of our cultural DNA

There was no you tube on internet. You could hear artists on the radio but you had precious few opportunities to SEE them

NPRSonari (Sonari R. Glinton)  @michele_norris I was my sister and her friends’ dance party while they practiced by watching #SoulTrain

Had to wait for bands to show up at arenas, stadiums or clubs & if yr city wasn’t on the circuit you were out of luck save for #SoulTrain

Sure there were variety shows that showed music acts on TV. But many acts, despite HUGE followings couldn’t get booked save for #SoulTrain

And even for acts booked on mainstream variety shows like Bandstand & Don Kirshner, there was a difference when they appeared on #SoulTrain

Case in Point. Recent Doc on Bill Withers showed him on Bandstand w/ plastic dancers sashaying on stage. He was tight, restrained, hemmed-in.

Check out Bill Withers on #SoulTrain. He was free to be himself. He went to Church with “Grandma’s Hands” and knocked you out with “Use me.”

ABL_Brands (A Beautiful Life)  @michele_norris I watched every weekend, mystified by the ads, intoxicated by the music. Told my mom I wanted to be black. I was three. 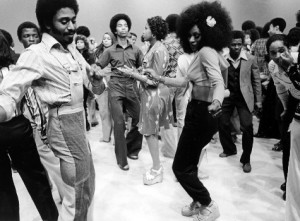 We watched on Saturdays for the music, for the clothes, for the swagger, for the dance moves and even for the ads #SoulTrain #AfroSheen

& notice I said kids of all hues b/c #SoulTrain was enjoyed by a whole lotta ppl who are not so-called members of the tribe. Get a witness?

myownpetard (Hopey McChangington)  @michele_norris i am white and jewish. my brother and i loved dancing around the family room along with soul train when we were kids!

tmwinsett (Tina Winsett)  @michele_norris Pretty sure 1st performance of Bill Withers I saw was on Soul Train. It was a must see when I was a kid in the 70’s

sjjphd (SarahJack) @michele_norris I have vivid memories of watching #SoulTrain w/ my black/white blended family in 80s. We’d form a line in the living room.

And if that crystal ball took you back to 70’s-era saturday morns, you’d also see Mama’s swaying at ironing board & Papa’s bobbing heads.

what else would you see if that crystal ball took you back to 70’s-era Saturday TV viewing of #SoulTrain….

SevenBlunts (Professional Thinker)  you better give the kids their history lesson miss @michele_norris. loving it! 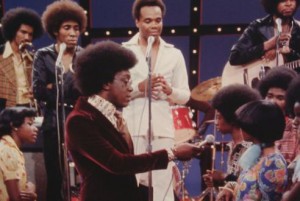 ..and then later you’d see strains of what they saw on #SoulTrain in THEIR rock music in THEIR fashions & in THEIR Broadway productions.

#SoulTrain was more than merely influential. It was Catalytic. It was affirmative. It was Woodstock AND Watts on your set every weekend

Ltlbrn1 (Ltlbrn1)  @michele_norris A crowd of kids and men in my dads barbershop singing and laughing. And commenting on the clothes and dance moves!

MrsGirlsLikeMe (La’keisha Gray-Sewel)  PPl @michele_norris is a must follow, especially on a day like this when our history and legacy need perspective & context

And it was all the more special, especially in the beginning because it was so hard to see unless you lived in certain cities

Don Cornelius always knew the Soul Train would roll thu all of America but when the show started it aired in fewer than ten cities.

In the early days You could hop on the train if you lived in Chicago, Atlanta, Detroit, Houston, L.A., Philly or San Francisco. #SoulTrain

I remember begging our parents to go see relatives in Chicago instead of Birmingham. Why??? Because Chicago aired #SoulTrain on saturdays

Minkado (Minka WIggins)  @michele_norris thank you for sharing your thoughts on Don C. & #SoulTrain. It WAS appt tv each week. Changed my life. What a visionary!

mltaylor13pt1 (Michael Taylor)  @AuthorofPatches @michele_norris Class is in session & Ms Norris is teaching. Pay attention, this will be on the test. #SoulTrain

eScapesPhoto (David Vernon)  Alternatively watching @michele_norris tweet the ups of Soul Train while @xeni talks about the downs of chemo. Both eloquent and enriching.

thatalexyarde (Alexander Yarde)  @michele_norris I remember my older sister & I watching Soul Train every single week, dancing & singing along. It was our ritual. 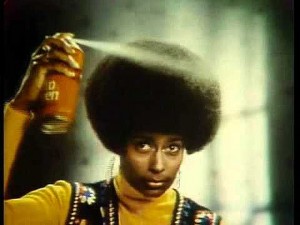 n the early days Don Cornelius struggled to get to the holy grail of airing his show in 25 cities for full syndication. Stations were wary

Don Cornelius was helped mightily by a deal he struck with Johnson products and all those ads for … say it with me…. AFRO SHEEN

At that point people started watching for the show AND the ads. At the time outsize afros were often seen as something beyond mainstream

Headrick (Carter Headrick)  @michele_norris growing up in Brainerd and Luverne, MN big afros didn’t scare me -they amazed me. Was curious then and still am amazed today

Trust me — at the time No one on television… at least mainstream television was talking abut “Beautiful Black Queens.”

Tho it must be said, those ads, fabulous as they were, have a slight cringe factor since the men always tended to look a bit like Huggy Bear

Point of #SoulTrain Johnson ads: make viewers FEEL foxy in a world offering up a standard of beauty that tried to make them feel otherwise

thatalexyarde (Alexander Yarde)  @michele_norris I remember the clouds of Afro Sheen wafting out of my older sisters room when she and her girlfriends were going out. #cough

Remember aforementioned ad-execs — they eventually came calling. As did the record execs and station managers.

They all wanted to ride #SoulTrain to profits

Old episodes are also available on You Tube. Worth watching. Also worth noting the way the opening changed over the years.

Don Cornelius changed opening from yr 2 yr to match mood of the moment. Must say, didn’t love them all but loved that he kept his ears open

clylesvibe (Carlyle)  @michele_norris |my favorite was TSOP original and George Duke’s version. O’Bryan put a nice groove on it too. #soultrain theme.

mollymoor (Sandra Hann) @michele_norris In the day.. #SoulTrain was the place to watch..to learn all the new dances & artists ..Hope Don Cornelius is a peace now 🙁

blindtravel (John Miller)  @michele_norris I got to watch some of it, was kinda on the tail end as I came of age but I loved it as a budding musician. Sad 2hear this.

CCedJWhite (Julie White)  I loved #SoulTrain 4 what it showed me abt the world beyond my small town. MT @michele_norris is now giving us a Don Cornelius tutorial.

SChambersBK (Seve Chambers)  I suggest if you want a thoughtful perspective of Soul Train and its significance, look at @michele_norris‘ timeline.

Later in life Cornelius admitted he didn’t immediately “get” Hip Hop or Rap. was probably when the engine on that train started to slow

Before I leave topic of Afro Sheen & #SoulTrain. This needs to be said.

… Misting Green-Apple or Strawberry scented grease on your hair is a BAD idea. (more likely to attract bees instead of romance)

brainac27 (brainac27)  @michele_norris Speaking of Broadway, the first time I witnessed @Jennifersspot sing the infamous”And I am Telling You” was on #SoulTrain

amirtaron (amir taron)  @michele_norris reflections on #soultrain need to be packaged and distributed. a true carrier of our culture, true #griot 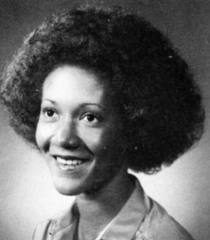 Truth is, if you’re of a certain age, you made a purchase or headed straight to the sewing machine based on something you saw on “SoulTrain”

Don Cornelius said in an intvw last yr that he was trying to shop a #SoulTrain movie. He talked to Eddie Murphy. Any idea what happened?

For those who are mourning Don Cornelius death and feeling melancholy about old times and #SoulTrain — consider this:

Don Cornelius ended show w/ 3 words. Think abt those 3 words. Say them out loud. Shout them if you must. Make sure they’re in your lives.

“... and you can bet your last money, it’s all gonna be a stone gas, honey! I’m Don Cornelius, and as always in parting, we wish you love, peace and soul!”

And lots and lots of  Soooooouuuuuuullllllll