Race: Are we so Different?- Michele Norris & Surprising Statistics One Minneapolis, One Read- The Grace of Silence

Race is rocks thrown at kids! 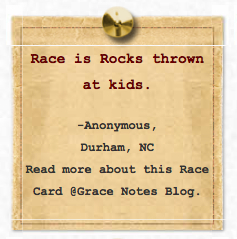 That is the way one of my readers summed up his feelings on RACE in six words. It was part of an exercise I’ve asked readers to engage in. I call it my Race Card Project. I ask people to share their thoughts, experiences, observations, hopes, laments or viewpoint about race in one sentence. But that sentence can only have six words.

The reader who handed me the card about rocks thrown at children was in tears when I met him during my book tour. He did not want to give me his name but he gave me his story. He’s now in his seventies but as a much younger man he was staunchly opposed to integration in North Carolina. He and his friends made that clear by throwing rocks and bricks at children who were crossing the color line to enroll in all-white schools. He knows that some of those projectiles hit their target and so now when this aging white man with broad shoulders and thick hands encounters older African Americans at the hardware, the library or his local Piggly Wiggly, he looks immediately at their forehead. He explained to me that he is looking for a scar. …and something else.

After all these years, he is also looking for a chance to say, “I’m Sorry.”

The little Race Card exercise was designed to kickstart a conversation while I was on book tour. Now that hundreds of those race cards have poured in, the project has grown into an archive of American attitudes on race during an interesting moment in American History.

Last Friday the White House called attention to another interesting moment in history that calls to mind that six word essay about school children with justifiable worries about sticks and stones. 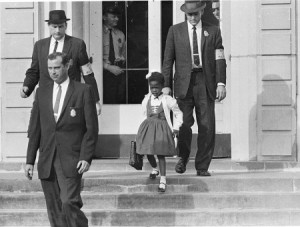 More than fifty years after Ruby Bridges walked into a newly-integrated school building in New Orleans amid jeers and taunts and death threats, President Obama honored her courage at the White House by hanging the famous Norman Rockwell painting inspired by her historic walk across the color line.

Rockwell’s painting is called “The Problem we all Live with”. It was an illustration for the January, 1964 issue of Look Magazine and it later became a popular print that hung in homes and offices around the country. That’s how I first encountered it when I was a child. It was displayed in a Minneapolis Library and when I saw it I was both fascinated and unnerved by the little girl depicted in the print. 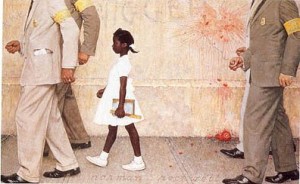 The problem we all live with — by Norman Rockwell (1894–1978), depicting an incident in the American Civil Rights struggle of the early 1960s, when Ruby Bridges entered first grade on the first day of court-ordered desegregation of New Orleans, Louisiana, public schools (November 14, 1960). Originally published in Look magazine. The painting is currently displayed in the West Wing of the White House, just outside President Obama's Oval Office.

Her hair is in braids, much like the ones my mother fashioned on me for school mornings. Her back is erect. She was wearing a white dress, white ankle socks and white tennis shoes that look like they had been bleached and scrubbed for just the occasion (Maybe she too kept a toothbrush next to the washing machine to work out pesky stains and make the rubber gleam like new.) The little girl in the painting is holding a book and a ruler, staring straight ahead as if trying not to notice the tomato that has sailed past her head and landed on the wall a few feet behind her… just to the right of the world “NIGGER” scrawled out in big jagged letters, though with the “n” partially obscured so that you don’t feel the full assault of the slur. Still, your heart breaks for that child.

Normal Rockwell knew that it would.

The man who built a career painting bucolic images of small town life served up something quite different with this work.

Something else from that painting always stuck with me. The child on the canvas is surrounded by four men. From the yellow bands on their arms, you know they are U.S. Marshals, commissioned to protect that child. You see their suits and their oxfords. One has papers in his pocket. Probably marching orders. But you don’t see their faces. Even as a kid, I thought that was odd.

Was it a brilliant move? Or, a cop out? Did it let white American’s off easy by avoiding the familiarity of Caucasian man’s profile?

Did it keep them out of the picture? Or, does it force the eye toward the child… and the racial dilemma in the early sixties. By cropping those heads, Rockwell kept the “we” out of a painting he called “The Problem We All Live With”. Maybe the idea was to make the viewer reach the conclusion that the collective “we” included that stoic little girl.

That painting has always stayed with me. Years ago, largely inspired by this Rockwell painting, I reached out to some of the marshals who escorted children during the desegregation of schools throughout the south. Much has been written about the brave school children who walked through a sea of racial hatred to enroll at segregated schools. There have been movies and documentaries and a raft load of childrens books. But there were few accounts that detail the experiences of the Marshals. Their role in history was rendered much like the faceless depiction in the Rockwell painting. I wanted to hear from the men who wore the arm bands.

I was able to track down two former U.S. Marshals, Don Forsht and Al Butler. They were part of a special team, specially recruited to carry out and enforce desegregation orders throughout the fifties and sixites. And that meant they were at all the major battlegrounds during the campaign of fierce resistance: Oxford, Little Rock. Birmingham, New Orleans. In town after town, they served as human shields for black children trying to enroll in all-white schools. They had amazing stories to tell and it is worth taking a moment to listen to their history.

Most of the Marshals that served in that unit are dead or getting on in years. We were lucky to track down these two and I am so glad we were able to preserve this part of American History. It’s one of my all time favorite interviews. I have always been interested in those who are at the margins in history.

We naturally tend to focus on the people smack dab in the middle of the spotlight, but the folks who are over at the edge of the frame usually have an equally interesting perspective. And when you think about, doesn’t that describe all of us?

Everybody has a story to tell. For now, I am trying to collect those stories, six words at at time.

Norman Rockwell used his position as America’s favorite illustrator to make a bold statement with his brush. President Obama in his own way did the same when he asked the Normal Rockwell museum to loan the painting to the White House where it will now be on display in the West Wing, just outside the president’s office — reminding all who pass by that the history captured in oil paint is now behind us, but there is still this “thing” that we all live with.

P.S. If you want to know more about Rockwell’s painting — the composition, history and inspiration check out the following links: 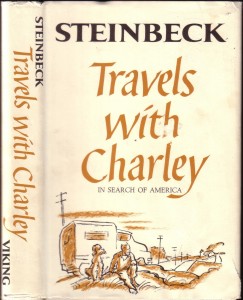 Or, you might want to read Travels with Charley, by John Steinbeck. The third chapter details how Steinbeck encountered a crowd harassing “a couple of tiny Negro schoolchildren” as they were escorted by Marshals into an all white schools. (William Frantz and McDonough 19) Most vivid are Steinbeck’s description of women he called “the cheerleaders” who hurled insults at the children that were so vulgar that the words were pulled by the publisher before printing for fear of generating lawsuits.

And if you want to learn more about the role of the U.S. Marshal’s in civil rights history: